Puri or poori or boori (Hindi पूरी (pūrī), Urdu: بوری, Tamil பூரி (pūri), Kannada ಪೂರಿ (pūri), Telugu పూరి (pūri)), Turkish:Puf böreği is a unleavened Indian bread, commonly consumed in India, Pakistan, Turkey, Bangladesh and Nepal too. It is consumed for breakfast, as a snack or light meal.
Puri is most commonly served at breakfast. It is also served at special or ceremonial functions as part of ceremonial rituals along with other vegetarian food offered in prayer as prasadam. The name Puri comes from the Sanskrit

The Ingredients
1. 2 1/2 cups Chappati flour (aaata,wheat flour)
2. 2/3 cup Water at room temperature
3. Ghee/Oil for brushing the bread while rolling out the dough
Oil for deep frying

The steps
1. Put flour in a large bowl. Make a well in the middle and pour in a stream of water in the center. Use one hand to mix the flour and water in a rotating motion from the center of the bowl outward, until the dough is moist enough to be gathered into a rough mass. Wet hands and continue until the mixture cleans the sides of the bowl and has become a nonsticky, kneadable dough. When the dough is kneaded, it will be elastic and silky smooth. To test the dough, press it lightly with a fingertip. If it springs back, it is ready to be rested. Resting the dough is the last step and allows the dough to relax and absorb the water and kneading. 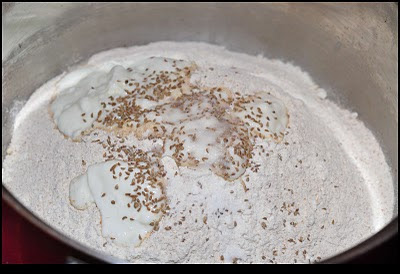 2. Rest for 1/2 hour in warm climates and 1.5 hours in cold climates. Cover with a wet towel so the dough does not dry out. The rested dough is light and springy, less resistant to being rolled out into the thin rounds.
Knead dough a little again. Dough should be stiff enough to roll without extra flour.

2. Make small balls of the dough and cover them with damp cloth.
Take one ball of dough and dip a corner of ball in melted ghee or oil and roll it out into 4 to 5 inches round.
Repeat the same process to roll out all pooris. 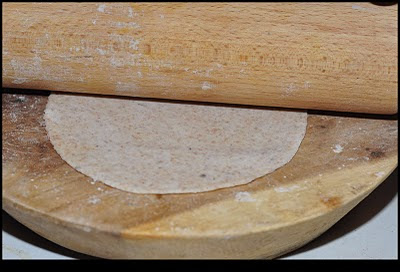 3. Heat plenty of oil in a kadhai until very hot.
Put in a poori and immediately start flickering hot oil over the top of it with a spatula so that it will swell up like a ball. 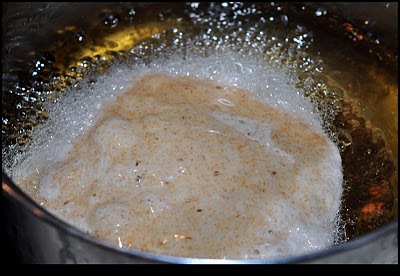 4. This should take only a few seconds. Flip the poori over and cook the other side until golden brown. 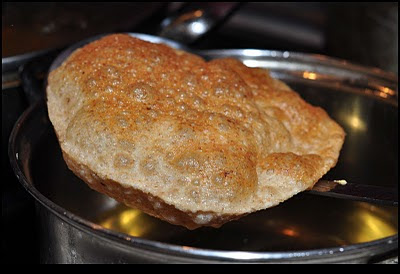 5. Serve the puri hot with pindi choley or other vegetables. 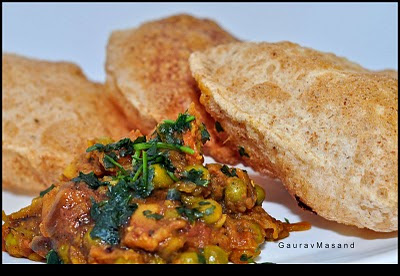 Posted by Gaurav and Bhavana at 3:38 PM No comments: Links to this post